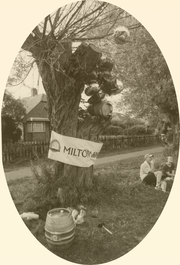 The Beer Tree was founded in 2001 when Richard Naisby (owner of Milton Brewery), at that time rowing for the Free Press, thought it would be a jolly good wheeze to put a barrel of his beer in a tree on the first night of the Town bumps. The beer was left over from a rained-off cricket match and nobody had any idea that the concept would prove popular...

That first night the plucky rowers of the St Radegund Metric Tonne — a Corinthian crowd, whose training mostly consisted of late night drinking sessions — achieved the near impossible — they got a bump! And promptly drank the beer tree dry. Thus setting a precedent that continues to this day.

After the startling success of the first night Richard (who owing to the later arrival of his boat hardly got a drink) decided that something good was happening and continued to put beer in the tree. Word got around the rowing community that the beer was there for all — and the amount of beer got bigger!

In 2002, it was suggested that though the beer was free it would be a good idea to collect for charity. So we did!

By 2003 the amount of beer being drunk at the beer tree was so much that "friends of the beer tree" rallied around to help with the cost of staging it (borne up to this point entirely by Milton Brewery). Nearly a thousand pounds were raised for charities over the course of the week and a record amount of beer was drunk (aided immeasurably by the fact that the St Radegund Beer boat, now containing the brewer, got blades!)

2004 saw over a thousand pounds raised for Cancer Research UK. Generous support from the friends of the Beer Tree ensured that ever more beer was drunk.

2005 saw the highest (and lowest) point in the life of the Beer Tree. A record number of rowers stopped, more pints than ever were drunk and £1800 was raised for the Milton Children's Hospice. And then some prat ruined what should have been a fun week by picking a fight with the charity bucket collectors.

And so to 2006. After the contretemps on the last night in 2005, Richard was frankly fed up with the whole idea of the beer tree. Organising such an undertaking is not to be underestimated. In the four days of its annual life the Tree gets through more beer than most pubs. Getting it to the tree (and bringing the empties home) is now a major operation in itself and since offers of help were thin on the ground it was decided to let the tree have a rest.

Until... the thirsty rowers of CSR came to the rescue and offered to run the tree on the Friday of the 2006 bumps! The Beer Tree lives!

Thanks to the generous support of CSR and Rowdata the 2006 Beer Tree was a major success — over 400 pints of beer were greedily devoured and a sum of £1100 was raised for Leukemia Research — and everyone had a fun time! 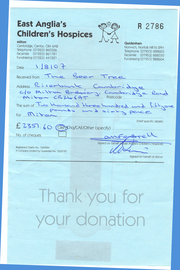 In 2007 the Beer Tree went back to the full four-day format. Over £2300 was raised for Milton Children's Hospice.

In 2008 exactly £3000 was raised for Macmillan Cancer Support. Over 1300 pints of beer were consumed during the four days and, on Friday, we had to resort to delivering the beer via a half-timbered Elizabethan dray. There was a curious outbreak of Displaylink gonks that threatened to take over the tree (but they were really very friendly)...

In 2009, we raised money for the Arthur Rank Hospice. £2800 was raised over the four days of the tree and a record amount of beer was consumed. A deluge on the the last night soaked everyone at the tree but at least provided some very pretty pictures (see the gallery for more).

In 2010, we raised money for the Milton Children's Hospice. The sun shone, blades were hard earned, spoons were richly deserved and over £4000 was donated by the thirsty rowers and spectators at the Tree. 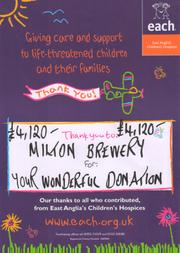 In 2011, we once again raised money for the Milton Children's Hospice. A record amount of beer was drunk and a record £4120 was donated by the thirsty rowers at the Beer Tree. A soaking on the last night did nothing to dampen the spirits, and the tree will flower again next year!

In 2012, we raised money for the Arthur Rank Hospice, whose palliative care for a veteran of the Beer Tree was sadly needed since last year's flowering. Despite one of the wettest weeks of the wettest summer on record we raised £2620, and the tree will flower once more next year. 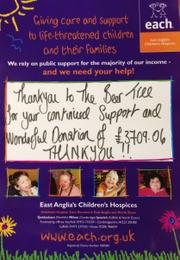 The 2013 Beer Tree charity was the Milton Children's Hospice. We raised over £3700. Four days of glorious sunshine saw the usual collection of crashes, blades and this year some rather striking club blazers! The Mayor of Cambridge even put in an appearance. For the first time, we experimented with water-borne cask removal.

The 2014 Beer Tree came within a whisker of being cancelled. An injured brewer looked likely to scupper plans until the Beer Wenches and assorted helpers from the St Radegund Boat Club saved the day. Around £4000 was raised for Milton Children's Hospice.

Three days of good weather and great Bumps racing were followed by one of the most prolonged and miserable downpours witnessed on the riverbank. Despite the soggy Friday, a total of £3700 was raised, to be split equally by this years charities, MIND (cambs) and Neuroblastoma UK.

The 2016 charities were, as always, suggested by the rowers, we supported Milton Children's Hospice and Parkinson's (Cambridge). A sum of £4665 was raised. This brings the total raised during the life of the Beer Tree to a little under £40,000. 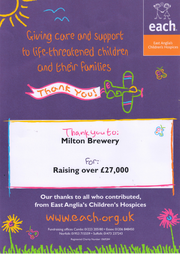 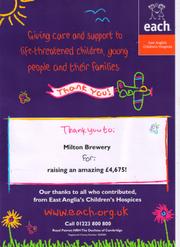